The 401k Optimizer is a product of Howard Capital Management out of Roswell Georgia. I worked with the Optimizer and other HCM products throughout 2020.

What is the 401k Optimizer?

The Optimizer is a SaaS app that was launched in 2018. It looks at your company plans and risk tolerance settings to recommend investments that are in line with your risk tolerance setting. In addition, it uses a proprietary algorithm called the HCM BuyLine to advise you when and how to rebalance your holdings in case of sudden changes in market conditions. It’s the user’s responsibility to make those adjustments with their plan provider.

I once worked with an events team that often required a very lengthy registration process for their week-long events. This included travel arrangements, hotel stays, golfing, breakout sessions, membership info, and much more. This gave me a pretty good gauge for what level of inconvenience people are willing to go to during a registration process. I also learned a lot about how challenging it can be for someone to do a seemingly simple task like sending in a copy of their membership card or signing and returning a PDF.

The onboarding process was waving two huge UX warning flags at me.

First of all, if your company plans are not already in the system the user needed to somehow get them to the Optimizer team so that they can add them.

Second, users need to rebalance their 401k each quarter to match the recommendations. This can be a daunting task especially if it’s your first time rebalancing. More on this later.

This journey map was a great way to get the team to notice the large and small challenges involved with using the Optimizer. 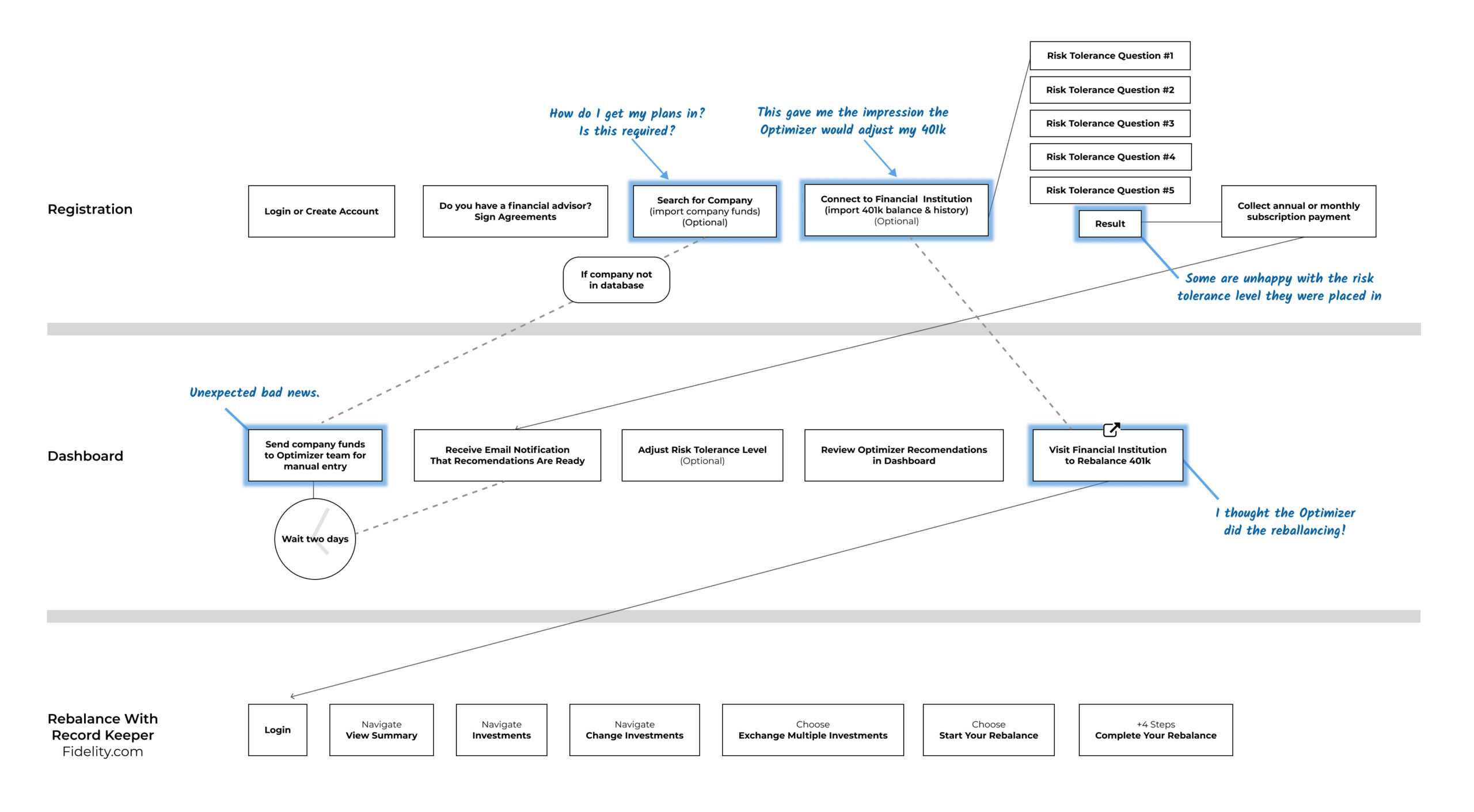 There is technically no way to get around the two challenges mentioned above, but there are things we can do to improve things. We decided to look to the user dashboard for opportunities to improve messaging and direct the users towards rebalancing. If they don’t rebalance when they should, it’s not working.

These discussion topics pertain to the opening screen of the Optimizer dashboard seen below.

A. Here they are giving users a direct link to their financial institution so they can rebalance their 401k. We all agreed that we needed to expand on this if possible. Below is a redesign that continues to define the process.

B. The Optimizer is a relatively simple service. At its core, it simply gives you recommendations and it’s your job to follow them. I think the amount of navigation areas(4) is an indication that the UI is more cluttered than it needs to be.

C. Rebalancing needs to be as simple as possible. Let’s not hide that information on a second tab.

D. Is Balance History and Rate of Return really that different? Could that space be better used? 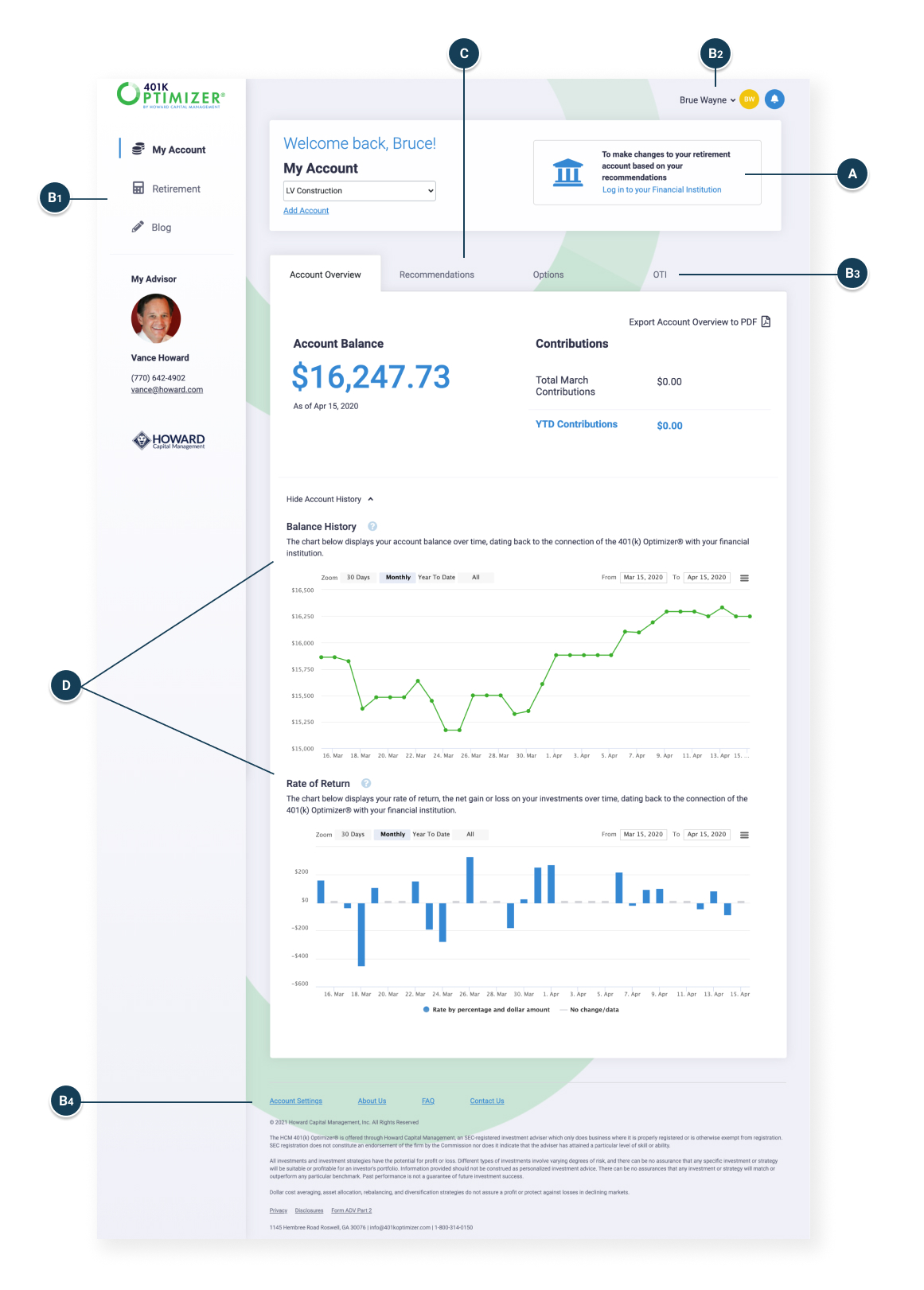 At this point, we felt ready to put together top-level discovery topics for research. These topics are based on stakeholder needs, support tickets, analytics, and our in-house team member that handles all support and user communication. Here is what we want to learn…

Financial advisors such as HCM are highly regulated, and have strict rules around publishing opinions or paying research participants. This and the Coronavirus made research a challenge, but I was able to meet with some friends and family for some off-the-record research.

The most interesting thing we learned when introducing people to the Optimizer is that they didn’t know they needed to send in their company plans to receive recommendations. They also were unpleasantly surprised to find they needed to rebalance their 401k themselves.

Based on what we learned we knew we needed to search for ways to make it easier for users to understand the rebalancing process and direct them towards it. I started with the Recommendations tab seen in the image below.

Remember the “Log in with your Financial Institution” button from the image above at A? We noticed that one of the first challenges users face when rebalancing is finding the actual rebalance page within their institution’s website. I expanded on that by also offering a direct link to where they would rebalance with a “Fidelity Rebalance Page” button.

We found that 80% of our users are with Fidelity. This meant we could offer more institution-specific assistance for at least 80% of our users! This led to the creation of specialized content such as emails and instructional videos for Fidelity users. We also built a Knowledge Center containing videos on how to use the Optimizer.

I noticed that there were numerous words used in the UI that all had a very similar meaning. Some were used interchangeably, and our research taught us that some users were unfamiliar with some of the financial terminology. “Options” was particularly confusing. We discussed limiting the vocabulary of words similar to “funds.” Those changes are reflected in the image below. 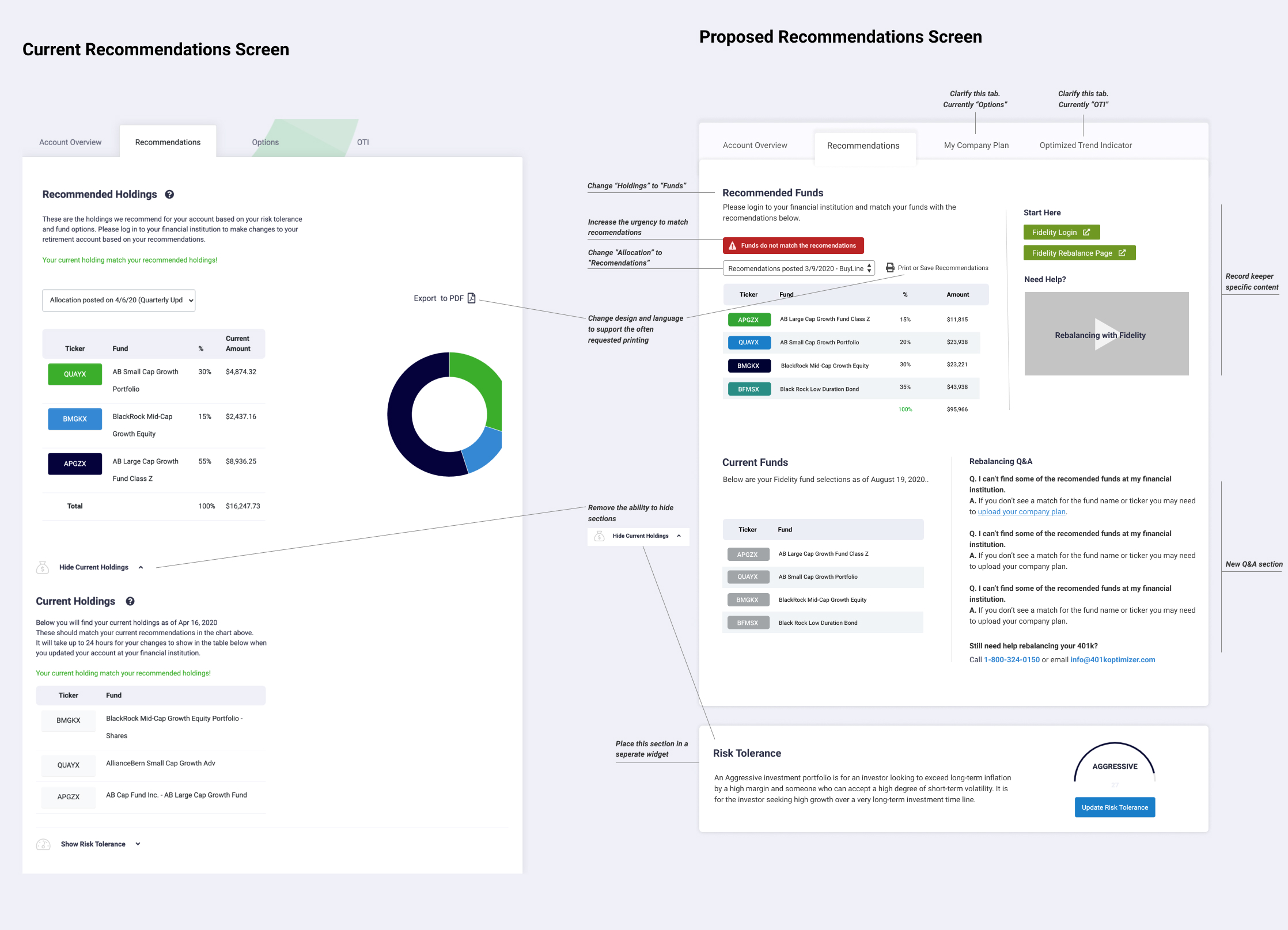 We learned that most people are not familiar with what an SDBA is. The new banner below achieves three things, defines SDBA, encourages users to get started with a CTA, and improves the video display. 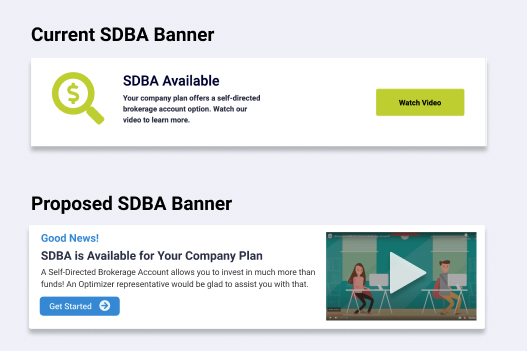 Prioritizing Information on the Dashboard

The primary change leading this next design is that the center tab-based navigation has been removed. This simplifies the information architecture and allows us to give users the most vital information when they sign in without having to do any searching. Page titles have been clarified and consolidated in the sidebar.

We have made the process of comparing your suggested funds and current funds simpler by placing them side by side. They are listed alphabetically and non-matching funds are highlighted red.

The existing risk tolerance IU was based on five multiple-choice questions each on a separate screen. After answering them you are given your risk tolerance score. The problem with this was that the level you are given may not be the level you want. To correct that, users would have to go back and answer the questions again with hopes that they would be placed in the tolerance level they like. In the design below the user can easily choose the well-defined risk level they would like. 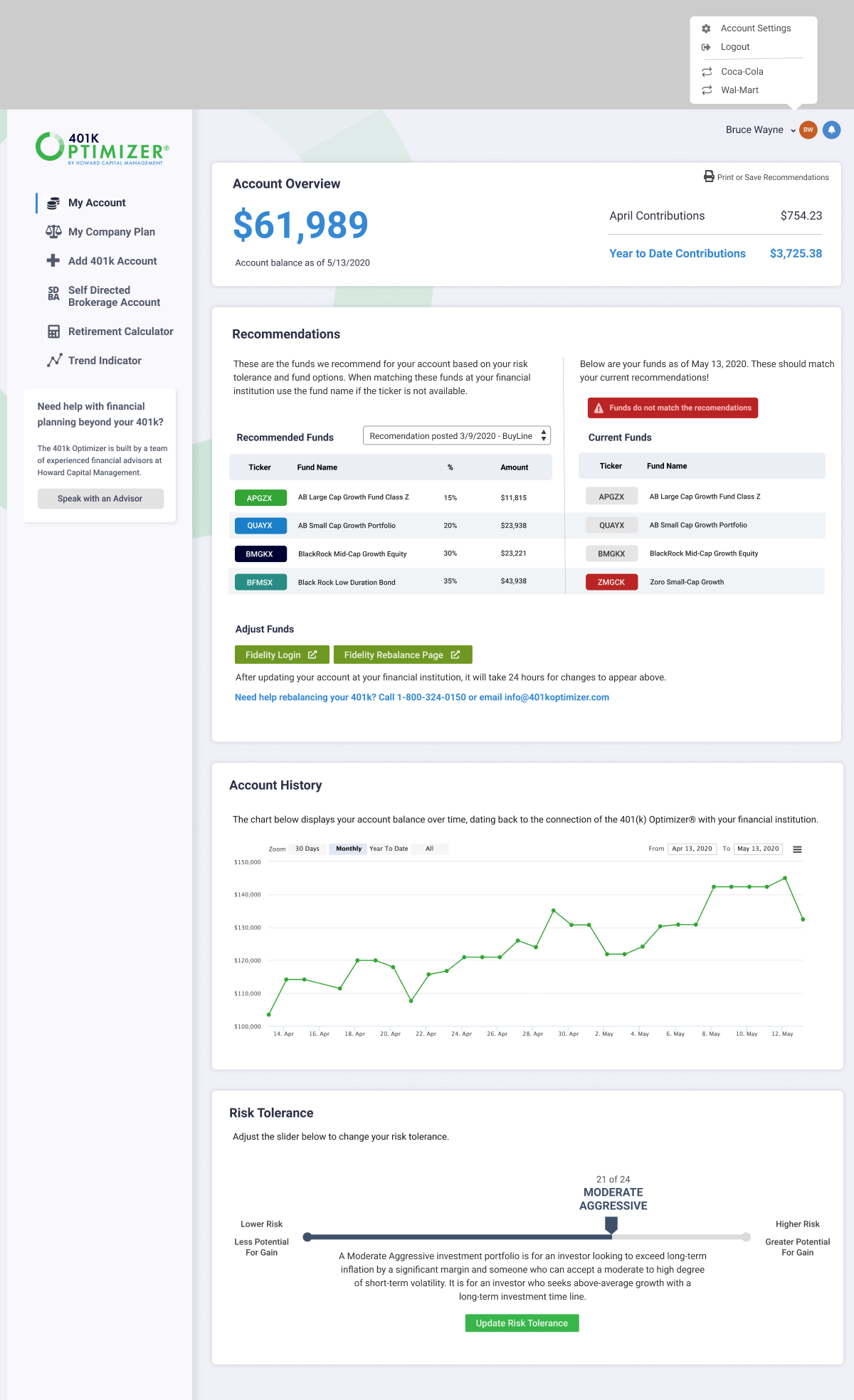 Below is another option we considered to help users match the recommendations to their holdings. When clicking “Fidelity Rebalance Page” that page would open in an iFrame to the right while displaying the recommended fund percentages to the left for easy matching. 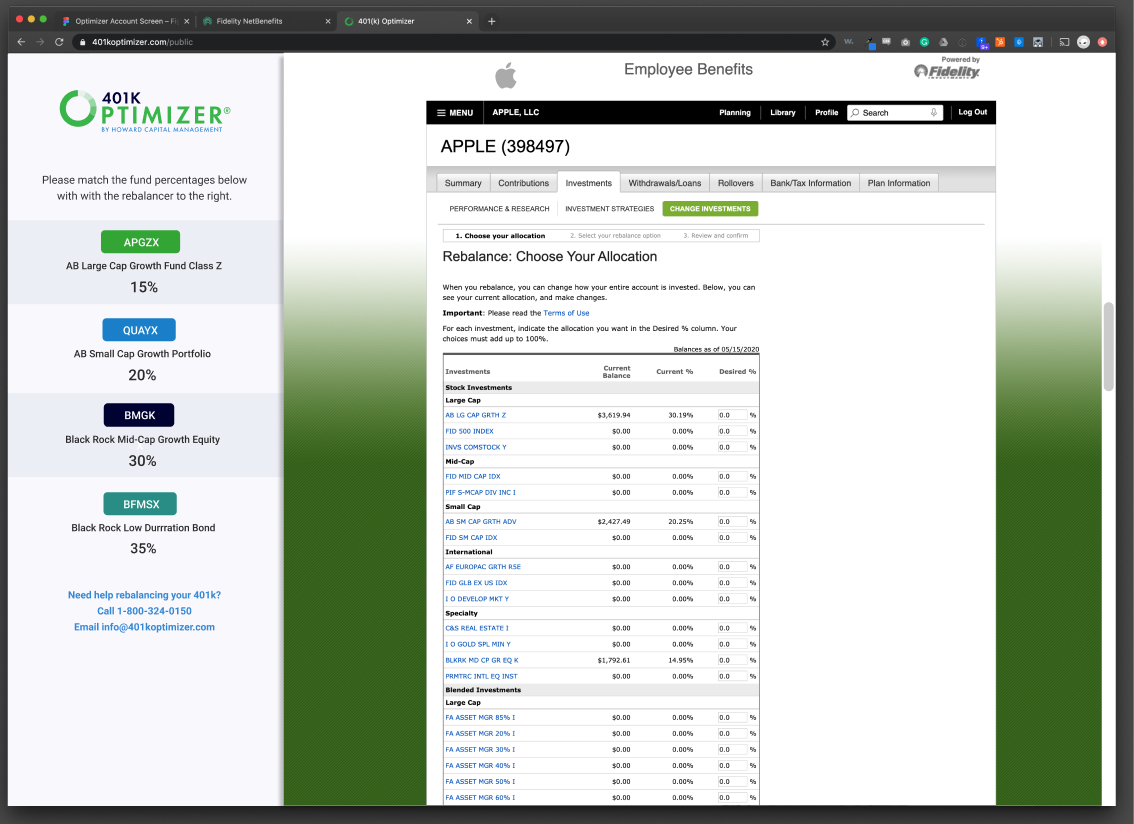